The Kirby-Greer Endowed Lectures are supported by William Joseph (Jay) and Catherine Craig Kirby and George and Jane Greer.

Jay graduated from Penn State in 1959 with a degree in labor management and received his master’s degree from Cornell University. Catherine graduated from Penn State in 1961 with an arts & letters degree. Jay is the retired senior vice president of FMC Corporation in Chicago, IL, a leading producer of chemicals for agriculture, food, and pharmaceutical markets. Together they established the William J. and Catherine Craig Kirby Professorship in Language Learning in the College of the Liberal Arts in 1998. 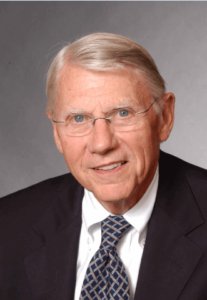 After graduating with an arts and letters degree from Penn State in 1954, George earned his law degree from the University of Pennsylvania in 1957 before starting a 37-year career at H.J. Heinz Company in Pittsburgh. He retired in 1997 as Vice President for Organizational Development and Administration. During his tenure at the company, he assisted and supported the greater Pittsburgh community, including projects with Penn State, through the H.J. Heinz Company Foundation. He and his wife, Jane, established the George C. and Jane G. Greer Professorship in Language Acquisition in the College of the Liberal Arts in 2005.

Abstract: In this lecture Nikolai Veresov presents and reveals Perezhivanie as the most intriguing and mystical concept of Vygotsky’s cultural-historical theory of development. Language acquisition as part of the acquisition of human culture is a form of cultural development. Psychological development of a human being should be understood only as an aspect of the process of cultural development. Traditional theories of development are based on the metaphor of the mirror and the principle of reflection. Cultural-historical theory challenges this metaphor and proposes a metaphor of the prism and principle of refraction. Perezhivanie is a kind of prism through which an individual refracts events in the environment and forms his attitude to it – the unique way of how a person perceives, understands, interprets and emotionally relates to the socio-cultural environment. Perezhivanie thus becomes the central fact of psychological development which explains the influence of the environment on the course of development.

Bio: Dr. Nikolai Veresov is an Associate Professor at Monash University, Australia. He has got his first PhD degree in Moscow in 1990 and started his academic career in Murmansk (Russia) as a senior lecturer and the Head of Department of Early Childhood. The second PhD was obtained in the University of Oulu (Finland) in 1998. Nikolai presented keynote/invited lectures at several international conferences, including ISCAR (International society for Cultural-Historical and Activity research). He published 5 books and over 160 articles/book chapters available in 9 languages. His area of interest is child development in the early years, cultural-historical theory and research methodology. He is an academic fellow at UNESCO Chair for early childhood development and care. Nikolai is a Chief Editor of Culture and Education international journal.

This relationship is examined in a research interview with a bicultural TESOL student participant, who from his first turn onwards raised seemingly irrelevant personal topics. When the researcher concluded the interview, the participant told a personal experience narrative. Using interactional sociolinguistic analysis of his narrative, Feryok shows how the narrative created intersubjectivity between the participant as narrator and the researcher as audience, coherence among the non-interview and interview topics, and integration of the participant’s different identities. The analysis of the participant’s narrative shows that the personal is professional is just like the personal is political. Raising personal experience is the foundation of raising consciousness, whether we are talking about the times of our lives, the conditions of our identities, or the expectations of our professions.

Anne Feryok is a senior lecturer in the Department of English and Linguistics at the University of Otago. Her main research area is in language teacher cognition and development, mostly conducted within sociocultural theory, and occasionally within complex dynamic systems, both of which reflect her interest in genesis and emergence and ongoing development in different contexts. Her work has been published in international journals and edited collections.

Systemic Functional Linguistics in Action in US Secondary Schools

Drawing on Halliday’s theory of systemic functional linguistics, Dr. Gebhard describes the formation of a sustained university-school partnership informed by a social semiotic perspective of language, learning, and social change (e.g., New London Group, 1996). This partnership supported teams of teachers, doctoral students, and literacy researchers in collaboratively designing curriculum and analyzing changes in the literacy practices of linguistically and culturally diverse students over time using case study methods (e.g., Dyson & Genishi, 2005). Dr. Gebhard shares findings from these studies with a focus on how multilinguals at the secondary level learned to read, write, and critique multimodal texts in math and science (Gebhard, 2019).

“What Does An Emancipatory, Scientific Psychology Look Like? Cultural-historical Psychology”

Specifically, I shall conceptualize genuine emancipation as solving social problems by eradicating their political-economic causes. Psychology contributes to emancipation by treating psychological issues as cultural issues having cultural causes. This role for Psychology alters its traditional orientation toward using individual processes to change individual behavior.

“Universal Grammar: Neither Nature nor Nurture”

Terrence W. Deacon will discuss some recent work that takes an unprecedented approach to universal grammar and the poverty of the stimulus argument. In his discussion, he will focus on symbolic reference and constraints by investigating four main categories: semiotic constraints, neural processing constraints, evolved sensorimotor schemas and cognitive biases, and pragmatic social communication constraints.

Title of presentation: Towards a Social Understanding of Mental Health

Dr. Smagorinsky will discuss his most recent work in neurodiversity which takes a social perspective on “disability” and “disorder,” viewing them as relational and situational rather than fixed in pathology. This talk will center on “mental health” as both whole-body and environmental and challenge assumptions about how to construct satisfying life pathways for the neurodiverse population.