The Third International Summer Insititute in Applied Linguistics was held on the Penn State University Park campus from June 22 to July 17, 2009. The Institute brought together internationally recognized faculty in applied linguistics and over one hundred graduate students from across the globe. The Institute featured twenty-seven different courses ranging from ‘Cognition & SLA’, to ‘Self, Identity and Agency in the Language Classroom,’ to ‘Sociocultural Theory and L2 Development,’ among others. 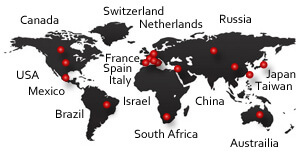 As in past years, the 2009 Summer Institute was very international, including faculty and students from Applied Linguistics communities around the globe.  The map above indicates the wide variety of geographical areas that summer institute participants hailed from.

General information about the 2009 Summer Institute in Applied Linguistics courses can be found here.

The first summer institute in applied linguistics was held on Penn State’s University Park campus from July 1 to July 26, 2002. The institute was supported by the International Association of Applied Lingulistics and the American Association for Applied Linguistics.

The following internationally recognized scholars participated in the 2002 institute: